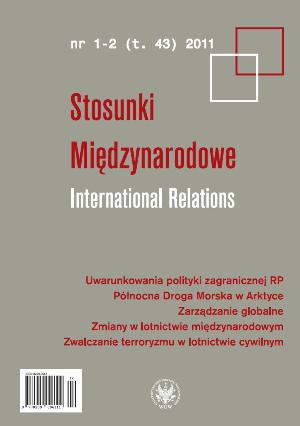 Summary/Abstract: Determinants of the foreign policy of states may be divided into internal and external(international), and within these groups – into objective and subjective ones. Among the objective determinants in the first group the following are signifi cant to Poland: 1) location in the centre of Europe, relatively high abundance in natural resources and predominantly natural borders of the country; 2) relatively high population potential, which currently amounts to over 38 millions, although it is continuously decreasing; 3) rather scarce economic potential (over EUR 350 milliards in 2010); despite the fact that it is increasing in the situation of the global fi nancial crisis, it is jeopardised due to low outlays on research and development, similarly to inconsiderable military potential of the country; 4) democratic political system, but impaired with the dependency of the foreign policy of the state on the ruling party. The subjective internal determinants, in turn, include: 5) not fully adequate perception of the international environment by the state’s society, media and authority circles, as well as social attitudes towards other countries and nations deeply rooted in the history; 6) two confl icting foreign policy concepts: one pro-European, pro-Atlantic and pragmatic towards the East, the other nationalistic, based on the bandwagoning strategy towards the USA, Euro-scepticism and anti-Russian attitudes; 7) diverse quality of the state’s foreign service and diplomacy. The following phenomena in the latter group of international determinants are objective in nature: 8) generally favourable tendencies in the evolution of the international situation in the closest neighbourhood of Poland, such as: the existence of NATO and the European Union (despite its internal problems), the will of rapprochement between Russia and the West, but also a growing role of the so-called emerging powers: China, India or Brazil; 9)generally high international status of Poland; 10) favourable structure and reach of the contractual international relations and the international law in force. External subjective factors, which are a refl ection of internal subjective determinants, also have an impact on the foreign policy of Poland. In general, it may be stated that currently, on the eve of the second decade of the 21st century, no threats to the Polish foreign policy, especially on the part of the international environment, are observable. However, the unstable and polarised internal political scene meets a significant challenge, or even a threat. The conducted analysis leads to the conclusion that the Poland’s policy will face signifi cant challenges within NATO and the European Union, and even more signifi cant challenges in terms of its policy towards the East – Russia in particular. The issue, whether all the problems will be handled by the authorities and how they will be solved will result in significant consequences for the international status and role of Poland