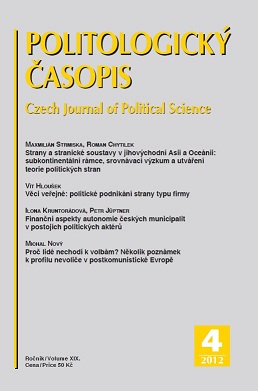 Summary/Abstract: The paper is devoted to the analysis of the Public Affairs Party, which entered the Czech House of Deputies after the 2010 parliamentary elections. The aim of the paper is to cover organizational matters and certain peculiarities of the party. As the most appropriate tool of analysis, the concept of a business firm party is used. The author shows how the political and economic interests of the party’s most influential member, Vít Bárta, overlapped significantly and that Bárta could be depicted as a kind of “political entrepreneur” misusing political activity for his business purposes. The analysis of the functioning of the Public Affairs Party and especially the distribution of power inside the party shows, in comparison to classical examples of business firm parties, that Public Affairs embodies a new way of intersecting politics and business practices: the already existing party was taken over (in a hostile way, to use the language of business) by a business company.