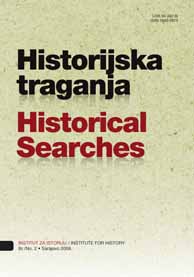 Summary/Abstract: The issue of conversions in Bosnia and Herzegovina is a rather complicated one given the multi-ethnic character of its population. In the three thematic blocks that cover the period from cca.1800 to 1918, the issues relating the sociology of conversion, the relations between conversion and politics, and the freedom of consciousness and modernisation of law are elaborated in this paper. Relating conversions, one can conclude with certainty that, in this period, there were individual conversions and that no massive conversion has ever been recorded. Most of the conversions were based on socioeconomic grounds. The acts of conversion posed significant difficulties both for the convert himself and for his community, since conversions were based on the understanding that one religion was somehow better than the other. The issue of conversions in Bosnia and Herzegovina in the forms it appeared in the 19th century is a clear example of modernisation of politicalauthority. Religion was actually just a pretext, while emphasis was on the mechanism by which one strives to gain the position of power and personal privilege based on the principle of distortion of reality. Elites, both spiritual and secular ones, distanced themselves from truth, while discrepancy between what is told and what it is in reality is what usually leads to violence. Legislature that dealt with the implementation of freedom of consciousness wanted to protect, at the same time, both the individual and the religious community he belongs. Freedom of consciousness is therefore born from a loose balance between self-determination and one’s social background. When these issues are legally regulated, then powerful interests to take part usually emerged among public administration and religious dignitaries.