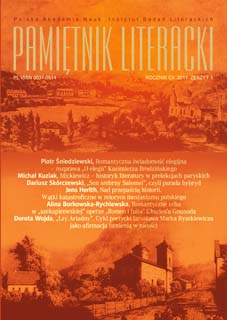 Summary/Abstract: The essay offers a rereading of Juliusz Słowacki’s puzzling and semantically complex masterwork “Salomea’s Silver Dream” (1843) in the light of postcolonial theory. The author applies Edward Said’s concept of orientalism and Homi Bhabha’s notions of hybridity, ambivalence, and mimicry to the study of representation of Polish and Ukrainian literary characters and their interactions in the drama against the historical and cultural background of the Polish-Lithuanian Commonwealth and Polish Romanticism. Unlike most of his contemporaries, Słowacki did not subscribe to the discourse of orientalisation of Ukraine as Poland’s “Other,” that dominated Polish writings of his era. The paper concludes that although “Salomea’s Silver Dream” was written by a Polish Romantic poet, it succeeded in transcending the limitations of the European political and literary ideas by offering a unique postcolonial perspective on Polish-Ukrainian relations, one in which the Polish presence in Ukraine was problematized, the Ukrainian agency was mobilized, and Ukrainian self-esteem was boosted.