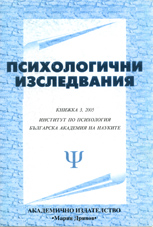 Summary/Abstract: The object of the present experimental study is to reveal the structure and dynamics of the value system of students from two societies, different in their culture and nature. As an object of comparison we have chosen students from the Republic of Bulgaria and from Republic of Yemen. We have assigned ourselves a task to study the values orientations of high-school students (10th, 11th, 12th grade — 17—19 years old) from Republic of Bulgaria and Republic of Yemen and trace the values orientation distribution in each cultural extract and to accomplish a comparative analysis. Within the range of the newly built cultural models we tried to present the actual individual value system of two societies, different in their essence and nature. The changes that take place in the value system are connected with deeper structural and functional alterations. In the two research extracts the core of the value systems contains the same value dominants. Common to all mankind values, such as love, health and vitality, personal and domestic happiness take the first three ring places in the hierarchical structure. Those are humanistic ideals and purposes, universal to all cultures. Comparing the actual condition of the value system of the two studied groups, we obtained interesting results, which partially confirmed a hypothesis we had assumed in advance. In Bulgaria the first six instrumental values are cheerfulness, ambition, manners, bravery, independence and strong will. Ambition and manners are also in the leading places in Yemen. The Significance of vital priorities in the hierarchy such as "health and vitality", love and "personal and domestic happiness" confirm the fact, determined by many researchers of value problems, that these values are common to all mankind and universal to different socio-cultural conditions. The values, which enter the dominant core of Bulgaria's and Yemen's value system are the same, but arranged in a different way. With a view to the contents of these values, by studying people from two cultures, we determined several differences. An obvious one — the statistically significant difference in worth of value.