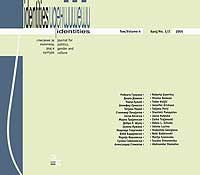 Summary/Abstract: Recent developments in the EU have reignited theoretical debates about the present and future role of the Union in the context of identity and citizenship politics. Starting with the proclamation of the Charter of Fundamental Rights at Nice in 2000 and culminating with the on-going debate about constitutionalism in Europe, scholars and political leaders alike have raised some important questions about the role of the EU in defining relations between individual citizens, citizens and member states’ governments, and citizens and the EU.