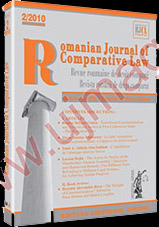 Summary/Abstract: The material presents the situation, from a juridical and historical point of view, of some European countries in the problem of religious symbols displayed in public spaces, especially in schools. The problem is discussed after the ECtHR judgement in the case of Lautsi v. Italy which has triggered an intense discussion on the constitutionality of these regulations. This article also presents the situation in Romania, where such problems occurred since 2006 or Germany, where the first question on the theme appeared in 1995. In the same time, the situation in Switzerland, a non member state of the European Union, is presented as well. The strong Catholic tradition of Italy is not the first one confronted with the problem of religious symbols, in the same situation was Spain some time ago, the situation there being also briefly presented