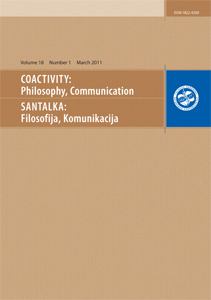 Summary/Abstract: By analyzing the mechanism of urban rituals, the paper refers to a concept of the city as a dynamic field of everyday practices as well as to a concept of “urban choreography”, which actualizes the interconnection between urban spatial structures, citizens’ emotional and bodily experience, and rules and conventions, which are embedded in the spatial structures. Following the notion of “spatial practices”, it is distinguished between passive practices, which reproduce conventional everyday scenarios, and active practices, which reveal the hidden potential of the place. One of the forms of practices that extend the functions of urban spaces is urban art interventions, which encourage citizens to use the space in a new, alternative way. Those urban art interventions, which imply an active interpretation and bodily participation of citizens, enable the formation of urban rituals, i.e. repetitive symbolic actions, which are connected with the particular place. In their turn, urban rituals produce a long-term impact on the public space by changing “choreography” of the particular place and (re)forming it’s “emotional scape”. For example, a ritual of making a wish by performing a simple movement at some special place in the city, changes usual trajectories and rhythms of the passers-by and saturates the place with joy and hope. The meaning of an urban ritual and emotions, evoked by it, are collectively shared by citizens, and “ritualized” places become a point of attraction for locals and travellers. Initiating new urban rituals by installing interactive art objects and by introducing simple scenarios of alternative use of public spaces could be considered as an efficient way to raise awareness of the urgent topic of deactivation of public spaces. A possible solutions of this problem are rooted in the understanding of the interplay between the spatial structures and our bodily-emotional experience. In the paper urban interventions by Lithuanian artists and activists, which inspire active (bodily) interpretation, are being examined in the paper.