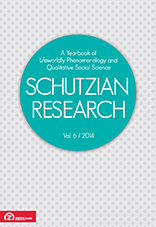 Summary/Abstract: Long debated has been whether or not the “objectivistic” epistemologies, quantitative methods and causal explanations, developed by the natural sciences for the study of physical objects, their actions and interactions, might also be applied to the study of human subjects, their experiences, actions and social interactions. Pointing out that such supposedly objective approaches would be singularly inappropriate to the study of the signifi cance or meanings, qualitative values and freedom of choice, widely regarded as essential aspects of human subjects, their experiences, actions, and social interactions, and drawing attention, a la Alfred Schutz, to the two meanings of the term “subjective” (i.e. of the subject, and, unverifi able) it is first argued that many of the claims of the natural sciences themselves are “empirically” unverifi able, in the Positivistic sense (i.e. attested to by the evidence of the five senses) of that term. Moreover, and most crucially, it is further argued that the “objectivity” of an experience cannot be empirically established on the basis of its supposed correspondence to some (quasi Noumenal) “objective” world—for, as precisely appearance or experience transcending, the existence of such a world, much less its nature, is clearly empirically unverifi able—and must therefore rest upon inter-subjective coherence, which in turn must, as Schutz has pointed out, depend precisely upon the very subjective experiences which those who would council such an “objective” approach, had ipso facto, sought to avoid as unverifiable. Thus, paradoxically, the criterion of objective verifi cation cannot itself be objectively verifi ed, but rests upon appeals to “subjective” experiences.