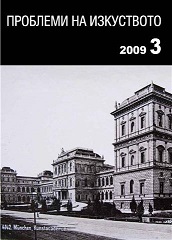 Summary/Abstract: The survey evaluates the importance and interprets the participation of many nations, represented in the 19th and 20th century in the Munich Art Academy by its professors and students . The basis of the research are the data from the register books of the Academy in the period 1809-1920 that contain the names of almost 13 000 students . The article begins with a presentation of a detailed statistics of the participation of different nationalities in the artistic life of the Munich Academy. Among those dominate the students from Europe. It is interesting to note, that students from the American continent were mainly of German origin. The non-German students in the Academy came mainly from the eastern part of Europe, the Balkans, Northern Europe and North America . The study offers also a wide view on university art education of that period mainly in Europe but also in America and the accent is on the role of the Academy in the formation of national schools in the arts and in general on its importance for the development of art during this period. Of great importance are the conclusions as to the reasons for applying to study in Munich. These reasons are quite numerous and highly varied but undoubtedly, noted lecturers, such as Cornelius and Piloti had attracted many students outside the country. The disposition of the political powers in the power structures in Europe favored the flow of specific nationalities . To be able to freely depict themes from the national history and episodes of the liberation struggles, for many artists was an important precondition in the choice of place to study . The disintegration of many states, made up of different nations, such as the Ottoman Empire, Austro-Hungarian Empire and the Russian Empire, the processes of coming to consciousness and the forming of nations which at this period was quite strong should also be examined as a key prerequisite for the fact that during the second half of the 19th century the Munich Art Academy became a melting pot of nations .