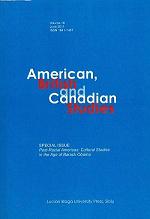 Summary/Abstract: This article takes as its point of departure David Hollinger’s concept of postethnicity and applies the concept to contemporary African American autobiographies. The texts by Henry Louis Gates, Jr.; Barack Obama; and Jennifer Baszile serve to illustrate ways of constructing black identity in the United States today along the lines of ethnicity, postethnicity, and transethnicity. The article looks at how the authors engage with the advantages and drawbacks of ethnic group affiliation and how new concepts of post- and transethnicity can show up new possibilities for group identification. In all three examples black identity is shown to rest on two pillars: identification with black cultural accomplishments and identification with black people in general. Furthermore, this racial-cultural identification is represented as indispensible for individual identity formation. Therefore, the negation of ideas of ethnic or cultural identity leads to a void that needs to be filled with new concepts. One such concept is that of postethnicity, which takes group identification beyond the racial-cultural border. Questions of “ethnic” identity seem to be getting more and more complicated today. Groups and their designations are in a constant flux. Because of those are imminent questions life narratives such as the ones analyzed in this article can help us understand the meaning of “ethnic” group affiliations in the global and transnational world that we encounter in the twenty-first century.