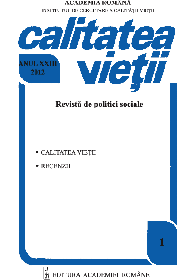 Summary/Abstract: The study describes the state of the Romanian social assistance system in the actual political, economic, social and moral environment, and within the framework of the new social risks generated by the economic austerity measures. One of the main consequences, if not objectives, of the austerity program has been the diminishing of the budgetary effort in regard to social assistance, very meager already, and the rejection of the social state’s role, disregarding the deteriorating of the living standards of the population. One could have expected that – after a series of debates around the child allowance, maternity leave and the decreasing of pensions and other social benefits for people at risk of marginalization – the new social assistance law would offer a reform project with answers to all these new social problems. In reality, the Law reflects rather a chaotically and unstructured response to various street pressures and emergency situations, which changes at a high pace, thus discrediting the idea of a viable project of a social assistance system during a crisis period. The fragility of the reform measures proposed by the new Law threatens the major objective of the social assistance system: the alleviation of severe poverty and social exclusion. This explains, up to a certain degree, the harsh negative reaction of the population to the austerity measures and the dramatic decrease of the trust in political decision-makers. In Romania, after 20 years, the system of social assistance finds itself in a deadlock, at risk of losing its identity and departing from the standards of the EU. Therefore, a better targeting and an adjustment of the benefits and social services to the concrete needs of marginalized groups, over longer periods of time, which could ensure the renewal of their social integration capacities, seems to be a central requirement for the social protection system within the new European context.