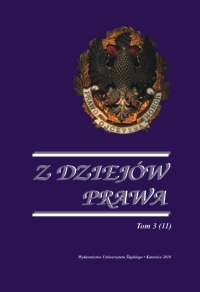 Summary/Abstract: Middle-aged canonists did not gain the authority comparable to the one of Roman lawyers. Their opinions were not respected by the source of law, they interpreted the law. They dealt with revealing and announcing the law, not its creation. The promulgation of decretals took place by sending them to the universities, above all the University in Bologna, which meant respect and appreciation of the importance of scholars. Thanks to promulgation decretals were “handed in” to lawyers, and were grammatically, rhetorically and dialectically worked by them. This way, they started their “second life” being moved into another context, used to solve other problems unpredicted by the author, confronted with other sources. Confronting the texts with reason, but also giving free rein to their imagination, their content was entirely taken out, ambiguities were cleared, and general statements were formulated. A canonic law was in effect not according to the sound of the text, but its interpretation by scholars. The advantage of a common opinion by scholars was largely weakened as a result of Pius VI’s prohibition to comment the decrees of the Trident Council. The interpretation of the council decrees was reserved to the congregation of the council created in 1564. The congregation did not publish its decrees (since 1793 they have been collected in volumes) and it was possible to get to know only thanks to the publications of the congregation clerks. At that time the notion of auctores probati appeared. The names communis sententia doctorum and auctores probati have existed together since then. The former meant the scholars who reached a consensus in the very subject-matter, the latter stood for the authors who based their opinions on hypotheses taken from church preaching. One should not draw hasty conclusions from accepting the hypotheses method instead of the issue method as to the academic level of postTrident canonists.