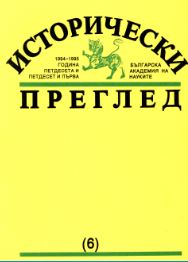 Summary/Abstract: In the period between 934 until 944 the Bulgarian Church acquired autocephalic status and its head the title of Patriarch. There is no evidence about the title during the First Bulgarian Kingdom. After the restoration of the Bulgarian Patriarchy in 1235, the evidences for the title show its development in time. The official title had two forms: one which the Patriarch himself used in the official documents and the other with which he was addressed. Apart form that, we notice the abbreviated and the full form. The former is found mostly during 13th Century. During the second half of the 14th century, the title of the Bulgarian Patriarch came close to that of his colleague in Constantinople. The composing parts of the titular form were influenced by mostly internal factors: the status, the ethnopolitical characteristics of the spiritual power, the balance of power between the spiritual and the temporal powers and the international position of the institution of the Patriarch in mediaeval Bulgaria.