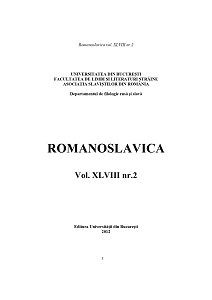 Summary/Abstract: In this literary critical approach we deal with Viktor Pelevin’s first novel Omon Ra from a postmodern view, considering the fact that here the author is deconstructing both the myth of the Soviet space programme and the heroism of the Soviet people. In the same time, we underlined the fact that the novel represents a satire of the Soviet utopia, being a grotesque postmodern version of роман воспитания, well known in the Soviet literature, as characters and subjects – typical for the mentioned period – are used as simulacra. Ironizing the past and the present of his country, Pelevin succeeded in “deconstructing the communist metanarratives”. Parodying the icons, symbols and discourses of the Soviet culture, the novel can be classified as belonging to the sots-art movement, as well as to the conceptualism, but foremost it represents a sample of postmodern writing – as we saw that through fiction, through metaphor the illusion created by the communist propaganda can be demolished.