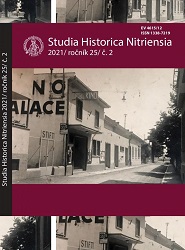 Summary/Abstract: The personality of Baroness Žofia Bosniaková (1609 – 1644), daughter of the Captain of the Fiľakovo and Šurany Castle, Tomáš Bosniak and wife of the later Hungarian palatine František Vešeléni, is most often associated with her social work and charitable activities towards her peasants. Charity was also a manifestation of her piety. As a noblewoman, she realized the need for social assistance to her peasants at a time when its structure and organization were still developing in our territory. She developed her charitable activities especially during her marriage to František Vešeléni, when her home was the Strečno estate, ie manor house in Tepička nad Váhom and Strečno Castle. During this period, she was heavily involved in helping the poor, willing to listen to them and stand up for them. In addition to occasional support, she founded the Poorhouse of Seven Pains and Joys of Virgin Mary which has been operating in Teplička nad Váhom for over 300 years. However, she was not limited to the inhabitants of Strečno estate but she was also involved in the affairs of her peasants at the inherited estates. Her social work has its following, especially in the vicinity of Teplička nad Váhom, to this day. Even with regard to these facts, we can characterize the social work of Žofia Bosniaková as the central benefit of her life.