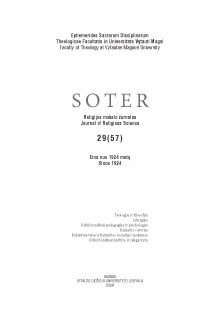 Summary/Abstract: In 2009 Lithuania celebrates the millennium of its first mention in the written sources of Western Europe, the Annales Quedlinburgenses. It contains an account of the death of the missionary Bruno of Querfurt in Lithuania (Litua). In 1009, the late Middle Ages, Germany was the first to announce to Christian Europe that there was a land, called Lithuania. In this article, the discussion will focus on when and what forms of Christian art could have reached Lithuania, looking at the first missions as a phenomenon of spiritual and cultural life. St. Bruno is significant not only as an eminent historical figure. He was the first missionary to bring Latin Catholic culture to the pagan Baltic lands. Bruno of Querfurt was educated at the cathedral school at Magdeburg where the great emphasis was put on Gregorian chant. He might have used that knowledge in his last mission. We will focus our attention on the tradition of liturgical rites, with Gregorian chant as an inseparable part of them, sung day and night, during their long travels along the pagan lands. In this paper the author is going to describe St. Bruno’s last mission from the musical point of view. We are certain that such a treatment may provide us with new insights into St. Bruno’s last mission. The hypothesis is that Bruno knew by hearsay something about the Lithuanian folk songs or laments which were an integral part of the pagan tribes’ life. In the letter he wrote to King Henry about his last journey, he said that he had arrived in the land of the barbarians singing the nobile carmen “Petre, amas me, pace oves meas”. This was his mission of life, and he expressed it by singing the quotes from the Holy Book. St. Bruno’s hagiography contains the mention of his miraculous escape and the way he was singing Gregorian chant. It must also be noted that when the medieval chant tradition was introduced to the Baltic tribes, it had a profound effect on Lithuanian consciousness and historical memory. Lithuanians heard Bruno and his retinue singing chants and the impact was strong. It is not difficult to conclude that the Gregorian chant had a strong emotional effect on both the missionaries and the pagans who heard these hymns. The relevance of St. Bruno’s mission in the context of Lithuania’s cultural history extends further to more problematic topics. One of these is the cultural meaning of St. Bruno’s mission in terms of liturgical music. Thus, this mission should be evaluated for Lithuanian history not only in a geographic and geopolitical context, but also a geo-cultural one. The article also stresses the importance of musical ties with Western countries in helping to Christianize the pagan state in the 13th century. This article examines some of the reasons why Lithuania chose to be baptized into the Western Church, the geopolitical situation of the pagan Lithuania and the diplomatic course chosen by King Mindaugas. Lithuania, the last pagan European state, was evangelized and baptiz