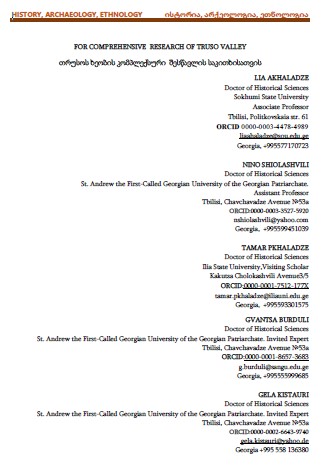 Summary/Abstract: At 2018 Georgia celebrated a 100-year jubilee of the restoration its state independency and establishing of the first Republic. Moreover in September 27th turned 25 years from the fall of Sokhumi and in August 26th – 10 years after the recognition of “independency” of Tskhinvali region and Abkhazia by Russia by gross infringement of the International law. Abkhaz separatists and Russian occupants have created an apartheid regime in Abkhazia where fundamental Human Rights of local Georgians are rough violated. In this situation, active de-ethnization of Georgians in the Gali region is passing, which aims to eliminate local Georgians from the common Georgian political, cultural, economic and social space. To achieve this goal the separatists and occupants tried to replace teaching language from Georgian to Russian, actively works propagandist machine – TV and printed press which official working language are Abkhazian, Russian and Megrelian. But mainly they are working only in Russian. There is created special barriers for Georgians for their participation in local political processes. We must note that Abkhaz separatists and Russian occupants have different view on the de-ethnization Georgians. Georgians are considered by separatists and occupants in their own camps. In this aspect they really confront each other.The authorities of Georgia should use all its possibility in the international arena for protect the rights and interests of the Georgian population of Gali. Otherwise, at the conditions of the Apartheid regime only two ways remain for Gali’s Georgians: either fully subjected to current pressure (which will be finished by their de-ethnization) or to resettle in other regions of Georgia. As we see both outcomes are highly critical for Georgia’s future and the prospects for conflict resolution.