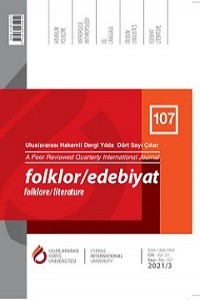 Summary/Abstract: We can adapt the concept of intertextuality, which is used to indicate the exchanges between at least two literary texts, to other forms of art with new denominations: For example, intertextuality as well as inter-picturality, intermediality, intermusicality, interfilmicity, interphotography, etc. denominations are frequently used in other fields apart from literature today. Depending on these namings, concepts such as rewriting, repainting are used as quotation, reflection, imitation, conscious inspiration, etc. We can also use it for other forms of art along with concepts (it is seen that such a vocabulary is frequently used in studies on this subject). In this study, we will transform the typology suggested by Gérard Genette in his work Palimpsestes and use it in some artistic forms. For example, we can talk about the different forms of interpictoriality in the field of painting, hence a new typing of the forms of pictorial transcendence used to denote the exchanges between two different sign systems. Accordingly, different forms of intersemiotics can be mentioned. These can be the transfer of a literary system to another sign system, or they can take place in the opposite direction. Intersemiotics, whose origin goes back to the concept of sign in Ferdinand de Saussure’s Course in General Linguistics and adapted to different forms of art inspired by Roman Jakobson’s concept of intersemiotic translation, is a product of an effort to present a method based on analyzing the exchanges between different artistic forms as well as literary texts. In this study, although limited as an analysis method, definitions will be made for the use of intersemiotics in different forms of art and some of its concepts