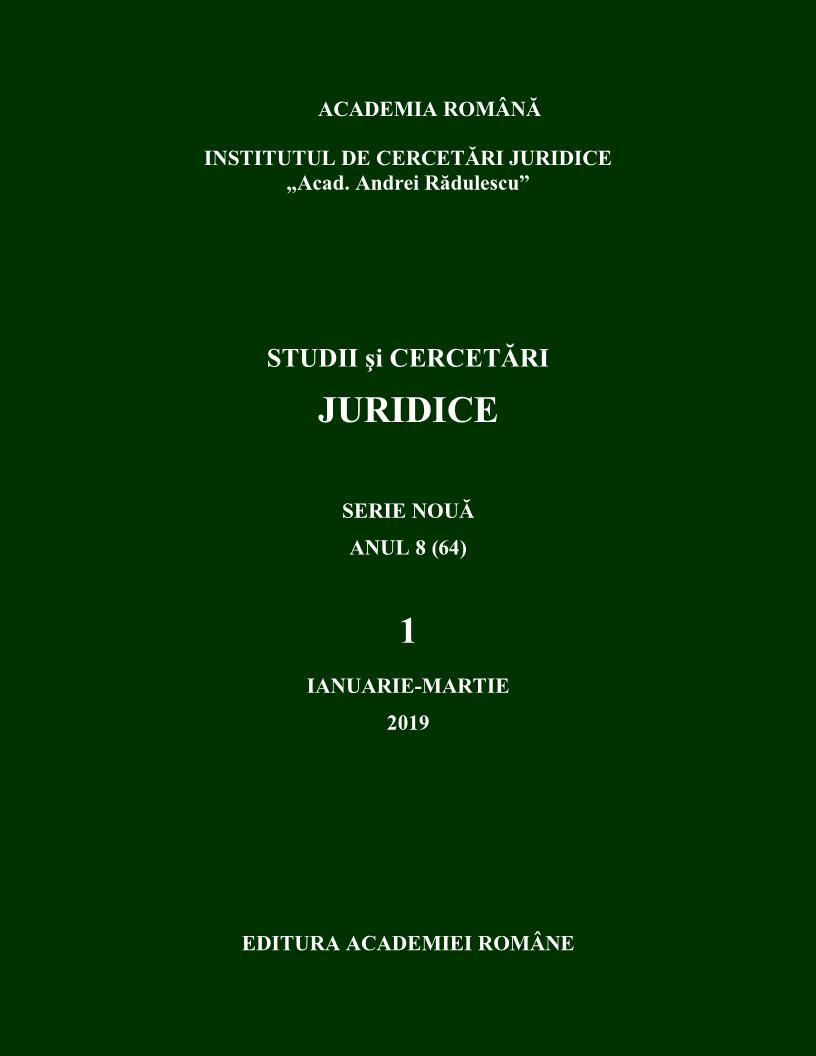 A venit timpul pentru o știință a dreptului și o cultură juridică românești !
The time has come for a science of law and a Romanian legal culture!

Summary/Abstract: Marking a major historical event, such as the Centenary of the Great Union (1918- 2018), imposed as well an analysis of the evolution of ideas and cultural practices in the field of law, including the perspective of creating and affirming a new science of law and a new Romanian national juridical cultural, an evaluation of the present situation and perspectives for the future. This has allowed the revealing of the evolutions of the said problematics and contouring the historical steps of its development: the interwar period, of completing the formation process of a science of law and proper juridical culture, the period of “socialist law” (1948-1989), of deviation and creative failure, and, finally, the present period, post-1990, of searching, initiating and affirming the creative elements of a new juridical development, West-facing and reprising the Euro-Atlantic tradition. Even though there have been 30 years since the legal and political relaunch of the country, the neglect of the creative and identity-focused aspects, doubled by the persistence of an technicist and imperative approach on the legal phenomenon had led to reaching the pinnacle of acceptability, beyond which there is the risk of losing any capacity for original contribution and promoting a proper juridical identity. To avoid collapse, the author of the manifest considers that it’s time to imperatively raise the issue of initiating and concentrating the approaches to constitute and affirm a new science of law and Romanian legal culture, one to assure the continuity and reevaluation of traditions, a better valorization of the present, and insuring a future evolution determined by creativity, originality, and identity.As a preliminary title, formally and as an emergency, they propose: (1) rethinking the development framework, promoting an integrated approach and establishing prioritary common themes of scientific research in the field of law; reaching a balance between fundamental and applied research, the national and European/international dimensions, as well as interdisciplinary/specialized; elaboration of a general strategy in the field and summoning, in this purpose, a national reunion (Étatsgeneraux…) of all the involved and interested actors, in order to debate, identify and promote the necessary leads for attaining such objectives; (2) reforming the manner of teaching and learning law, promoting its science and practice, forming a field that creates the specialists necessary to the scientific and cultural progress, and professional advancement; overcoming institutional and academic immobilism, the impediments of massification and hyper-specialization; valuing the multiple recent experiences – such as: transsystemic education, selective branches, legal clinics – and an adequate integration of higher education, scientific research and professional practices (cultures) related to the field. Fundamentally and related to the contents of the problem: (1) founding them on the tradition of Roman origins and on the neo-Latinity of the modernity of the components of the Romanian juridical civilization; on a Roman law seen as “intimately and completely enclosed in the historical and rational structure of modern law”, one that is and remains “culture and history, and not even the modern (or post- modern – M.D.) has found the miraculous formula that would allow them to escape from history and culture (Valentin Al. Georgescu); (2) the priority of (re)founding, as much as possible, a Romanian juridical identity, centered around tradition, continuity, and historical and cultural exceptionality, having as principal vehicle constitutional identity, as a form of manifesting unity through diversity; (3) promoting original scientific and cultural creation, with major echoes in the advancement of juridical national and universal knowledge and progress; regaining the interwar prestige and consolidating the Romanian creative contribution; (4) conceptualizing and promoting juridical development as an inseparable part and essential dimension of the development of Romania, and promoting it by pertinent strategies; assuming and manifesting neo-Latin juridical solidarity amongst the family of Roman-German continental tradition and accepting globalization through hybridization, cohabitation and continual dialogue of the traditions and specific identity values; (6) refusal of a global law and accepting a globalization of law as sum and synthesis, and not as a unilaterally imposed whole; (7) reconsidering the “constants of law” from the perspective of a natural law understood in the logic of the philosophia perennis of law, rejected not only by the socialist ideology, but also by the “bourgeoise” legal theory (the “juridical permanences” of Mircea Djuvara) and refounding the science of law in this spirit.