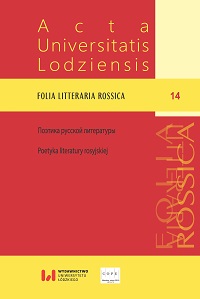 Summary/Abstract: The purpose of this article is to study the relations of the neotraditionalist cycle and genre strategies, as applied to Boris Pasternak’s cycle of poems “Wind (Four Fragments about Blok)” (1956). Despite an abundance of research dedicated to Pasternak’s attitude to Aleksandr Blok, still little attention is paid to the poetics of this lyric cycle. The analysis of genre strategies, the concept of which has been developed by Valery Tyupa, and the principles of lyric cycle, proposed by Igor Fomenko, were used as the methodology of this research. The paper is organised around the following points. Firstly, while the main title (“Wind”) and the meter (amphibrachic trimeter with the rhyme scheme AbAb) function as a centripetal force of the cycle, the configuration of various genre invariants becomes a centrifugal force. Secondly, however, the genre repertoire shows a special logic of the lyric cycle, which can be characterised as a movement from the vertical of the ode to the horizontal of the ballad. The first poem follows the strategy of the ode, but cannot be regarded as a traditional one. In the second poem, the lyrical subject uniquely combines the strategy of the idyll with Blok’s radicalness through the image of wind. The third poem also takes up the strategy of the idyll; here, however, signs of an impending catastrophe can be seen in the lines resonant with the first poem of Blok’s cycle “On the Kulikovo Field”. In the final poem, looking at the lines from Bely’s poem “To the Motherland” (“And you, firestorm, / rage and burn me, / Russia, Russia, Russia”) makes it possible to identify the strategy as that of the ballad (“Blok awaited this storm and its lashing. / With flame- -strikes its lashes would hit” [from Don Mager’s verse translation, “Wind”]). Thirdly, the analysis of Pasternak’s cycle from the perspective of genre strategies helps us to reconstruct a dialogue between poets, which is inherent in the neotraditionalist poetics. Finally, the artistic logic of combining genres in this work sheds new light on the poetological characteristics of the neotraditionalist cycle, which should be distinguished from the poetic homage.