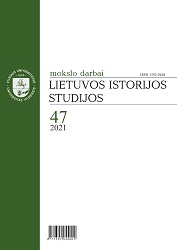 Summary/Abstract: This article presents a socio-historical study that combines an analysis of the theoretical model of the “new man” in the late Soviet period (1964–1988) with an empirical study of personal experiences of people who were students at schools in the Lithuanian Soviet Socialist Republic (LSSR) during this period. The aim is to analyze how the teaching and learning process were organized during the late Soviet period in LSSR schools, how it was understood by the participants of this study, and what were the possible differences in the experiences of schoolchildren. Also, it is equally important to determine which of the schoolchildren’s experiences in this period could be qualified as “unifying experiences” that formed the mentality of the late Soviet period generation. These experiences are compared with the common Soviet vision of the “new man” education, which was also changing during the late Soviet period. While searching for the answer to how much of the theoretical “new man” model was adopted by this last Soviet generation in LSSR, we use a post-revisionist approach and focus on the narrative of everyday history – what it meant to be schoolchildren in Soviet schools. The research revealed that the formal institutionalization of collective life for schoolchildren through Pioneer or Komsomol organizations was ineffective in creating a collective community feeling between the young generation. During the late Soviet period in LSSR schools there were four main disciplinary practices: formal notices by writing or by word, unsanctioned physical punishments, preventive disciplinary practices, and informal shaming. The last informal disciplinary practice was considered by schoolchildren in todays perspective as the most effective means of discipline at schools. These practices reflected the model of monitoring each other in the adult Soviet society and formed the horizontal control system involving students, their parents, and teachers. The research revealed a preliminary informal social stratification of children in LSSR schools during the late Soviet period. It was not related to the vision of “the new man” education but encouraged an already existing division within the LSSR society. This was a complete departure from the ethical-moral visions of educating “the new man” in schools, which were based on the demolition of the established class division, enabling this “new man” to create a welfare of socialist society by their own hard work and heroic achievements.